This is a compilation of the most frequently asked questions about Fair Share Idaho.

For many years income tax cuts for the top earners in Idaho paired with the growing number of sales tax exemptions for special interests have resulted in a state tax structure that is inadequate for raising the revenues necessary to fund the state’s on-going commitments, most specifically the commitment included in the Idaho Constitution requiring that the state “establish and maintain a general, uniform and thorough system of public, free common schools.” (Article IX, Section 1, Idaho Constitution)

Why a ballot initiative?

The Idaho legislature has been reluctant to raise revenues to adequately fund public education. It appears that the citizens of Idaho need to provide the civic leadership to solve this problem.

What does the proposed ballot initiative do for Idahoans?

The League of Women Voters of Idaho has filed a ballot initiative with the Secretary of State to address the following tax issues in Idaho:

Following the filing, the initiative effort was turned over to members of the League study group who formed a separate organization and registered it as a political action committee, as required by state law. The objective of the new organization, Fair Share Idaho, is to build a coalition to gather the necessary signatures to give the voters in Idaho a choice on these matters on the November 2016 general/presidential election.

Would a reduction in the sales tax rate help Idaho families?

Yes, of course. Idaho families need a raise – badly. Idaho has the second highest percentage of minimum wage jobs of all states. Some 100,000 workers in Idaho earn just above $7.00 per hour.

How does the Idaho sales tax rate compare to those in nearby states?

Will this eliminate the sales tax on groceries?

No. The Idaho Center for Fiscal Policy provided data on the issue because during the 2015 legislative session, trading the grocery tax credit for a grocery sales tax exemption was proposed. The Center found that the grocery tax credit is actually a greater benefit to lower income families. However, a lower sales tax rate would benefit everyone who buys groceries, including those with lower incomes. Link: http://www.idahocfp.org/new/wp-content/uploads/2015/04/End-of-Session-Proposal-Revised-Final.pdf

Is this an anti-tax initiative?

No, taxes are necessary to provide the public goods that serve all Idahoans and all Idahoans share the civic responsibility to pay a fair share. This initiative is an effort to restore fairness to the state tax system and to recover the revenues needed to more adequately fund the public services that the state has been entrusted to provide for its citizens.

Trends in state tax policy changes have caused the state’s overall tax structure to become unbalanced by favoring a few while shifting total sales tax burdens to lower income individuals and families through a higher sales tax rate. Further, with the growing list of exemptions, many special interests have stopped paying sales taxes. These trends hurt both Idaho families and future economic growth. The tax base is unstable and families have less disposable income to help grow local economies.

How much are the current Idaho sales tax exemptions?

According to the FY 2016 General Fund Revenue Book, the current sales tax exemptions total more than $2 billion. The General Fund appropriation (the primary source for state appropriated education funds) for FY 2016 is just over $3 billion for all of state government.

What kind of sales tax exemptions will this initiative eliminate?

There was undoubtedly a rationale for each current exemption when enacted by the state legislature. BUT they add up to advantages granted to a few at the expense of the many. And in this case, the “many” are the children of Idaho who need everyone to pay their fair share so that education can be adequately and fairly funded in rural and city schools, in districts with little property to tax and districts with more. Link to document: EXEMPTIONS PROPOSED FOR ELIMINATION TO REDUCE THE SALES TAX RATE AND BROADEN THE SALES TAX BASE

If this passes, will there be any sales tax exemptions left?

Yes, some are needed to conform to the principle of sales taxes levied at the “point of final sale.” Also left in place are exemptions related to education, medical care, heating, churches, donations, tribes and government.

Why does this initiative include taxes on some additional services?

Nationally, the trend for states is to add sales taxes to services to expand their sales tax bases and reduce the need to raise the sales tax rate. Sales tax on services is not new in Idaho. Several categories of services are already taxable – lodging, recreation, admissions, restaurant meals and printing.

Currently, when you buy a burger at McDonalds you pay sales tax. With this proposed initiative, services of lawyers and accountants will also include paying a sales tax. And a $20 haircut will cost an extra $1 with a 5% sales tax.

Since most services are not linked to basic needs, taxing services will have less effect on lower-income families and reduce the regressivity of the Idaho tax system. At the same time it will broaden the tax base and provide revenue stability because services are a part of the economy that can be taxed to contribute to funding actual necessities, like education.

What will be the total impact on revenues if Idaho voters pass this initiative?

The Fair Share Idaho initiative would lower the tax rate from 6% to 5%, and general revenue from sales and excise tax collection by $253 million, based on 2016 Fiscal Year projections. However, with the deletions of 22 special interest tax exemptions and additional revenue from taxing 12 services, an additional $677 million would be collected. The net gain would be $424 million which could be used to fund our education system.

The chart below shows this gain graphically: 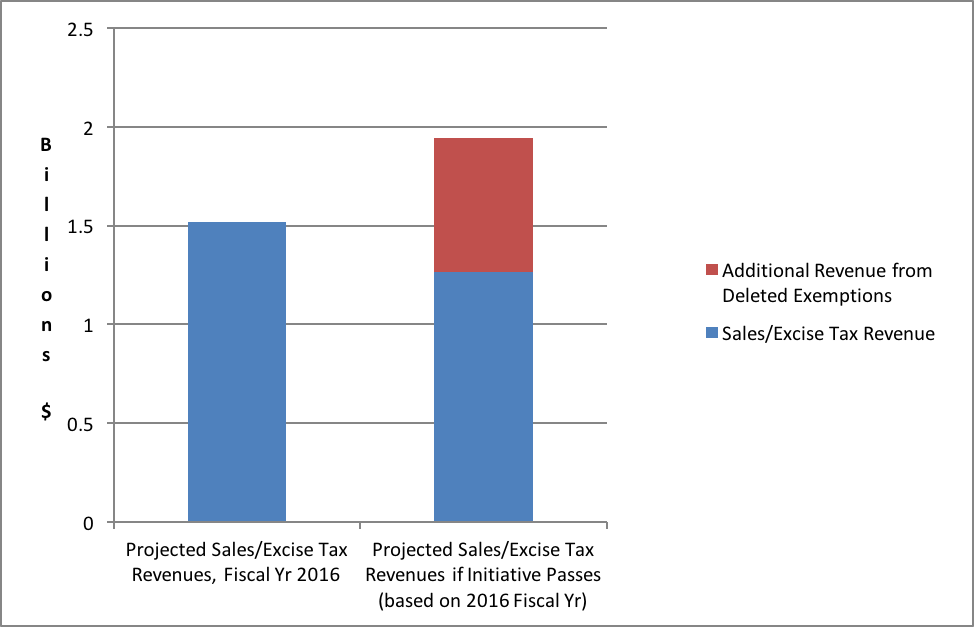 What is the background on sales taxes and rates in Idaho?

The sales tax was put in place to reduce reliance on other state revenue sources needed to fund state government’s responsibilities, most particularly public education.

The sales tax rate has gone up and down since its original enactment. When it was last raised from 5% to 6%, the political “reason” was to give property tax relief. However, since 1965 special-interest exemptions have been added routinely while the list of Idaho’s unmet needs continues to grow. Local property taxpayers are being asked to partially and insufficiently fill the gap with local levies.

Are sales taxes considered a “fair” method of taxation?

A state sales tax may appear to be a “fair” way to collect taxes, since everyone who makes purchases pays the same rate. However, sales tax is an example of a regressive tax which is a tax that impacts lower income groups more negatively. With sales taxes, lower income people pay a larger percentage of their total income than wealthier people do, even though the rate is the same for everyone.

Sales and excise taxes are known to be particularly regressive because low-income people spend nearly eight times more of their incomes on these taxes than do wealthy people, and middle-income families pay over five times the amount of the upper-income families.

In Idaho for taxes this means that:

The Institute on Taxation and Economic Policy’s 2015 report [here] http://www.itep.org/whopays/

Making the sales tax rate even more regressive in Idaho are the exemptions for paying sales tax in Idaho state law; most of these benefit special interests, not the average Idahoan. Examples of these exemptions, added since 1965, include: precious metal bullion, telecommunications equipment, and canal company purchases. (General Fund Revenue Book, FY 2016)

Thus, special interest groups are not paying into the General Fund at the same rate as average Idaho citizens.

Why have sales tax exemptions been enacted by the Idaho legislature?

When the sales tax was first passed in 1965, the exemptions were focused on adding sales tax collections to “point of sale” transactions for goods, i.e. items bought from retailers.

Are sales tax exemptions generally supported by the broader community?

These exemptions or tax “incentives,” have been used by many state legislatures over the last 30 years to compete with each other to lure new businesses or keep existing ones within their state’s borders.

BUT, exemptions are not without controversy. Those enacted to attract new businesses are considered unfair to competing businesses that already exist in the state, businesses that have already made investments in facilities and equipment, and hired a target number of employees. This special treatment is doubly unfair to existing businesses since they will most likely have to pay higher taxes overall to cover the costs of the special “incentives.”

What are the economic policy advantages to reducing sales tax exemptions?

Policy analysts agree that a broad tax base and low tax rates achieve “neutrality,” meaning taxes have little effect on the free market or economic decisions. By contrast, specific business tax credits, deductions, and exemptions provide incentives to particular business sectors, but not everyone.

Special tax exemptions also lead to inequities in the overall tax base. If multiple interests and business sectors avoid paying taxes, the tax base shrinks and everyone else has to pay more. In Idaho, the policy trend has been to lower the top income tax rates, raise the sales tax rates to partially offset the cost of sales tax exemptions and shift the state’s responsibility for school funding to local property owners. This inequitable trend is showing up in statistics about the economic health of Idaho families.

How does Idaho’s state funding of schools compare to other states?

In the 2015 National Report Card Executive Summary on school funding, Idaho is 49th. There was no state lower. The ranking measure was the comparison of the average state and local revenue provided per pupil across the states.

The Summary also reported that “There is a $12,000 funding differential between the highest (New York) and the lowest (Idaho) funded states.” (Is School Funding Fair? A National Report Card: Executive Summary) LINK: http://www.schoolfundingfairness.org/ExecutiveSummary_2015.htm

The 2015 report from the Education Week Research Center gives Idaho an “F” in school finance, 49th in the nation. For spending, Idaho is given a score of 42.1 against a national average score of 65.4. The overall “quality counts” score for Idaho is a D-, 46th among the 50 states and the District of Columbia.

Idaho’s revenue cuts since the 1990s “means we have $500 million less to invest each year in education, health care, public safety and other priorities.” The recession reduced revenues, but “much of the long-term loss is due to policies that Idaho enacted over the past 15 years.” One of the results has been that nearly 40 of Idaho’s 115 school districts are operating with 4-day school weeks. And school districts are struggling to generate funds locally to fill the gap created by reduced state funding.

This is a commonly held myth dating back to the original consideration for approving an Idaho Lottery. In reality funds from the Idaho Lottery add less than 2% to state funding of public education.

What about state funding for higher education?

“Just since 2008, Idaho has decreased state funding for colleges and universities by 37% per student, adjusted for inflation.” This means that costs have been shifted to tuition from 7% of the cost of college in 1980 to 47% in 2014.

Does the grossly inadequate state funding of education impact the economic quality of life in Idaho?

In 2014, Idaho’s per capita income was lower than all states but Mississippi. Since Idaho school funding ranks 49th of the states, the relationship is clear and represents a successful “race to the bottom.”

In Idaho, more than 40 school districts operated on 4-day school weeks in 2014.

“The stability of a republican form of government depending mainly upon the intelligence of the people, it shall be the duty of the Legislature of Idaho, to establish and maintain a general, uniform and thorough system of public, free common schools.”
(Idaho Constitution, Article IX)

In 2014, the Idaho Lottery contributed less than 2% of the state’s appropriation for education.

Thank You for supporting Idaho's children!